SIDNEY WEBBER On Thursday, April 13, 2017, Sidney Webber died at Fred Douglas Lodge.  Born July 19, 1923 at the Grace Hospital to parents, Sidney E. Webber and Rosetta Margaret Webber.  Sidney was an only child, spending most of his free time with his family. Sidney grew up in the North End of Winnipeg, residing on Inkster Blvd. as a child and later receiving the home of his parents. His cousin Nancy Webber resides in Victoria, BC. Sidney’s greatest memories as a child were when his Dad worked for CPR and would be given passes to the rail. Every summer his family would vacation to West Minister or English Bay so he could swim in the ocean. Sidney attended Luxton School for grades one to nine, advancing to St. John’s Tech for grade ten and carried on to business College to become an Accountant. He started work in 1942 as an Accountant for Dominion Bronz Company, where he worked for many years until retirement. Sidney loved to golf at the Kildonan Golf Course and was a member of Granada Speed Skating Club for five years and spending many hours in his garden.

Thank you to Fred Douglas Lodge staff at Evergreen as well as Rev. Paul Peters Derry for all your care and support. Funeral Service will be held on Tuesday, April 25 at 10:00 a.m. at St. John’s Cathedral Anglican Church, 135 Anderson Ave. with interment following at St. 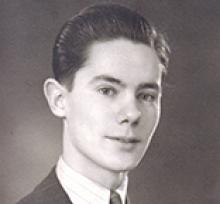