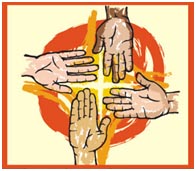 The annual Week of Prayer for Christian Unity will be celebrated in Winnipeg from January 17-24, 2016. The theme and resources for 2016 were prepared by a group of representatives from different parts of Latvia. The theme “Called to proclaim the mighty acts of the Lord” (cf. 1 Peter 2:9) highlights the relationship between baptism and proclamation, and the calling shared by all the baptized.

The 2016 Week of Prayer will begin with a City-wide Ecumenical Worship Service at 7:30 p.m. on Sunday, January 17, 2016 at Saint John XXIII Roman Catholic Church, 3390 Portage Avenue, Winnipeg. All are cordially invited to participate in this opening celebration with church leaders and in the other various gatherings that will be held throughout the Week of Prayer. For more information on the opening service and the ecumenical choir being formed for the occasion, please see the poster on the church bulletin board. Please see the schedule for a listing of events throughout the city during the Week of Prayer.

An ecumenical choir is being formed to lead music at the forthcoming celebration on January 17th which will mark the opening of the annual Week of Prayer for Christian Unity. No audition is required. Anyone who can carry a tune and wishes to sing in the choir is welcome! Rehearsals will be held at Saint John XXIII Roman Catholic Church, 3390 Portage Avenue, Winnipeg, from 2:30 to 4:30 p.m. on Sunday, January 3, 2016 and on Sunday, January 10, 2016. A short final rehearsal will be held immediately before the Ecumenical Worship Service on Sunday, January 17, 2016. For further information, you may call Michele Barr at 204-453-5016 or contact her via email: mbarr41@shaw.ca