When it was evening on that day, the first day of the week, and the doors of the house where the disciples had met were locked for fear of the [Judean authorities], Jesus came and stood among them and said, “Peace be with you.” After he said this, he showed them his hands and his side. Then the disciples rejoiced when they saw the Lord. Jesus said to them again, “Peace be with you. As the Father has sent me, so I send you.” When he had said this, he breathed on them and said to them, “Receive the Holy Spirit. If you forgive the sins of any, they are forgiven them; if you retain the sins of any, they are retained.” (John 20)

You notice here, no doubt, that Jesus says to all the disciples, twice, ‘Peace be with you.’ He says it to the disciples – except for Thomas, who is out – who are afraid, even though they’ve been told he’s alive, and are hiding in their terror. So why has Thomas been singled out through the centuries as ‘doubting Thomas’?

But Thomas (who was called the Twin), one of the twelve, was not with them when Jesus came. So the other disciples told him, “We have seen the Lord.” But he said to them, “Unless I see the mark of the nails in his hands, and put my finger in the mark of the nails and my hand in his side, I will not believe.” (John 20)

You notice here too, no doubt, that Thomas, ‘doubting’ Thomas, asks only what the other disciples have already been given: Jesus came and stood among them and said, “Peace be with you.” After he said this, he showed them his hands and his side. So why exactly is Thomas called ‘doubting’ when he asks only for the same gift?

A week later his disciples were again in the house, and Thomas was with them. Although the doors were shut, Jesus came and stood among them and said, “Peace be with you.” Then he said to Thomas, “Put your finger here and see my hands. Reach out your hand and put it in my side. Do not doubt but believe.” Thomas answered him, “My Lord and my God!” Jesus said to him, “Have you believed because you have seen me? Blessed are those who have not seen and yet have come to believe.” (John 20)

Again the words come, the words full of grace and truth, full of life and light, this time to Thomas himself, along with all the rest, “Peace be with you.” A week later they’re still in hiding, still afraid, even after their encounter with the risen Christ himself. But now Thomas is back, and Jesus turns to him and speaks directly to him, gifts him with same opportunity the others had already been given. Thomas replies with an astounding confession of faith (“My Lord and my God!”) which nobody else had yet mustered, except perhaps the Apostle to the Apostles, Mary Magdalene, First among the Faithful, after her encounter in the garden with Jesus risen. Thomas sees, he hears, he believes, and he confesses, that is, he makes public proclamation, a statement of faith which others can hear.

Now Jesus did many other signs in the presence of his disciples, which are not written in this book. But these are written so that you may come to believe that Jesus is the Messiah, the Son of God, and that through believing you may have life in his name. (John 20) 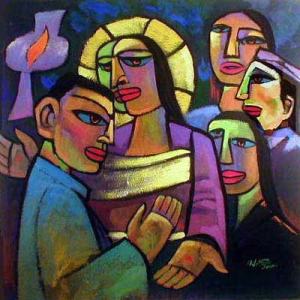 What’s at stake here, finally, is not the faith of Thomas, or other first century disciples, it is our faith, the faith of twenty-first century disciples. The testimony is given, the witness shared, the Gospel proclaimed, so that hearing the Good News of Jesus crucified and risen, we may experience the living Word of God, Jesus Christ who is life and who gives life, who, in his resurrection, begins a whole new creation, even if we are still afraid, hiding, doubting, confused. But he also, gracefully, patiently, gently, and peace-fully, offers us and all the gift of faith. This gift is offered and given so that we too may share day by day in the new creation, in the power of his life, in the living hope of God’s love which is stronger than death in every form.

Thanks be to God!