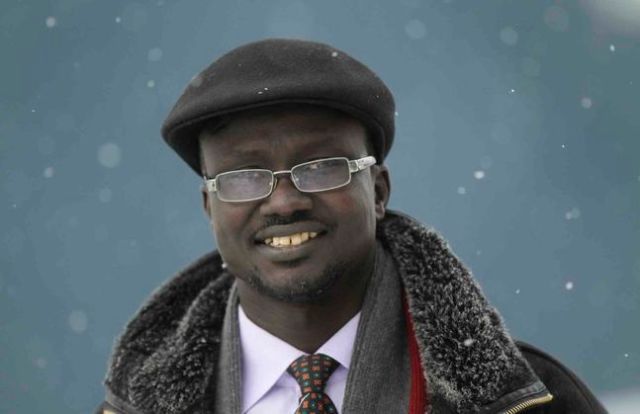 [Jesus:]  You are the salt of the earth; but if salt has lost its taste, how can its saltiness be restored? It is no longer good for anything, but is thrown out and trampled under foot.  You are the light of the world. A city built on a hill cannot be hid. No one after lighting a lamp puts it under the bushel basket, but on the lampstand, and it gives light to all in the house. In the same way, let your light shine before others, so that they may see your good works and give glory to your Father in heaven.  (Matthew 5:13-16)

For decades a terrible war raged in what was then called the Sudan, in what was then the largest country in Africa.  The Muslim, Arabic-speaking north with the government in Khartoum dominated and persecuted and exploited the African people of the south, most of whom are Christian, many of whom are Anglican.

In 2005 a peace accord was signed, and, only two years ago, the world’s newest country was born as South Sudan gained its independence, with much celebration and great hope.  The vast majority of Sudanese in Canada are from the south, refugees during all the terrible years of warfare with the north.

We have two Sudanese parishes in the Diocese of Rupert’s Land, both in Winnipeg:  St. Andrew’s Sudanese Mission (The Rev. Justin Laki) which gathers for worship on Sunday afternoons at All Saints, and Emmanuel Sudanese Mission, which worships on Sunday afternoons at St. Matthew’s, now part of West End Commons ( http://thewestendcommons.ca/ ).  The priest for this community is The Rev. Reuben Garang.  Reuben is Sudanese, and arrived in Canada many years ago as one of ‘the lost boys’.  He has an amazing story to tell.  Read a little bit here from 2011: http://www.winnipegfreepress.com/local/ex-child-soldier-overcame-hardship-to-earn-diploma-131910418.html

In December of 2013 he left to visit family and friends in South Sudan where he had not been since he left war-torn Sudan in January of 1987.  That was the plan at least: http://www.winnipegfreepress.com/local/lost-boy–going-home-233804651.html  We had Reuben here at the Cathedral not long before he left Canada, but just after the new conflict had broken out between the President and the loyal part of the army, and the Vice-President and his armed followers.  He joined us for the Dean’s Forum, along with The Rev. Deacon Abraham Kuol Chuol, also from Emmanuel.

But things changed on the ground in South Sudan, quickly, and Reuben was never even able to get into the country, much less travel to his home area, right in the middle of all the terrible violence.  He made a number of entries into his blog while he was in Uganda, first hoping to enter South Sudan, and then looking for ways to contact his family.  Read it here: http://goinghomesouthsudan.blogspot.ca/search?updated-min=2013-01-01T00:00:00-08:00&updated-max=2014-01-01T00:00:00-08:00&max-results=6

In speaking with Reuben, one of the most painful aspects of this tragic conflict for him is the fact that it is between groups who are, for the most part, Christians.  European Christians, only now recovering from centuries of slaughtering each other, can understand some of that pain, and know also that we must listen in humility to the experience of Christians from other places.

Reuben arrived back in Canada and Winnipeg just a few days ago; we thank God for his safe return home.  Abraham, with us also in December, received news that several of his family members had been killed in the recent violence, including his father, his stepmother, five uncles, and numerous other relatives as well.  Please uphold him and all his family in prayer in this time of frightful loss.

We are honoured to have Reuben with us again on Sunday, this time to preach, and are very grateful that he can join us also before worship at the Dean’s Forum (9 a.m. in the narthex) to share his story.  Thank you, very much, Reuben!  Thank you also for reminding us that we are part of a larger reality called the Body of Christ, including the Anglican Communion (http://www.anglicancommunion.org/ ).  We hold you and Abraham and your families and The Episcopal Church of Sudan and South Sudan all our sisters and brothers there in our prayer.

On January 30th our Primate, The Most Rev. Fred Hiltz, issued a call for prayer for the people of South Sudan, and all of East Africa (http://news.anglican.ca/news/stories/2671 ).  In addition, the Primate has written a letter to our Prime Minister calling for the involvement of the Canadian Government in helping the people of South Sudan to achieve “a firm and lasting peace.”

As the Primate put it:  “Let us listen as one Anglican family in Canada to the concerns of Canadian Sudanese Anglican men and women seeking peace for their homeland and loved ones, and act together.”