On Sunday, April 3, St. John’s will host the annual Diocesan celebration of Mothering Sunday and Anglicans from around the Diocese will gather at the Cathedral for this ancient rite.

Mothering Sunday is one of the many Christian celebrations that has its roots in paganism (Christmas and Easter fit into this category, too).  In mid-March, the Romans held the Hilaria Festival to honour the mother goddess Cybele. When Christianity became the state religion of  the Roman Empire Hilaria morphed into Laetare Sunday, a day to honour the Virgin Mary. It was called Laetare Sunday because the opening line of the Gregorian chant introit used on that day  is “Laetare Jerusalem” (“Be joyful, Jerusalem”).

In the medieval church the fourth Sunday of Lent is also known as Rose Sunday. It was the practice of medieval popes to send gold roses to the heads of state in the Holy Roman Empire.

The name Mothering Sunday is commonly used throughout the Anglican Communion, and it stems from the practice whereby servants on large estates were allowed to visit their homes (and, presumably, their mothers) on the fourth Sunday of Lent, taking with them gifts of simnel cake. It was also the practice in the English church for people to attend services at their Diocesan Cathedral, the mother church of the diocese.

By the third decade of the 20th century, Mothering Sunday observance had lapsed in most places throughout Europe, but with the advent of World War II and the arrival of Canadian forces stationed in the UK, it was revived. The Canadian soldiers celebrated Mother’s Day on the second Sunday in May, and the Church of England thought it would be appropriate to revive Mothering Sunday as a day to honour mothers, along with the practice of forgathering at the Cathedral. While the second Sunday of May continues to be Mother’s Day in North America, in Europe, Mother’s Day is Mothering Sunday. In the Church of England and other parts of the Anglican Communion, Mothering Sunday is the only day in Lent on which a marriage ceremony can take place.

On Mothering Sunday at St. John’s, the Bishop will consecrate the holy oils used in various sacramental rites of the Church. 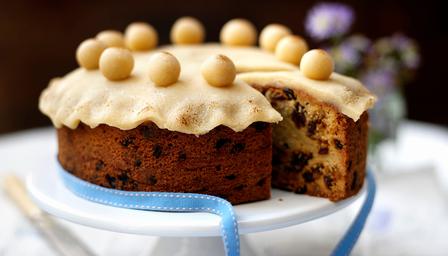 If you’d like to sample simnel cake, join us at St. John’s on Sunday, April 3rd at 7:30 p.m. for the annual Mothering Sunday service.
We serve simnel cake with coffee and tea at a reception following the service.

And what is simnel cake, you ask?. It’s a flat round cake, made with simple ingredients. If you’d like to sample simnel cake, join us at St. John’s on Sunday, April 3rd at 7:30 p.m. for the annual Mothering Sunday service.  We serve simnel cake with coffee and tea at a reception following the service.

If you want to make a simnel cake, try this recipe, which dates from 1768:

Method: Cream butter and sugar together. Add eggs, one at a time, and beat each egg into creamed bitter/sugar until thoroughly blended. Add salt, vanilla extract, flour, currants, and candied peel and combine well. Pour batter into greased and floured 8-inch cake pan and bake at 350 degrees Fahrenheit for about 25 minutes or until a knife inserted in the centre of the cake comes out clean. Combine icing sugar with enough hot water to make a thin glaze and pour it over the cake while it is still hot.

To make a larger cake, triple the recipe and bake in a Bundt pan for 1-¼ hours.